Inflation in the United Kingdom reached a new record high in July as the nation’s households continued to feel the effects of historically high food and energy costs.

According to figures released by the Office for National Statistics on Wednesday, the consumer price index increased by 10.1% yearly, above the consensus estimate of 9.8% provided by Reuters and increasing from 9.4% in June. The largest factor in the month’s increase was rising food costs, a sign that inflationary pressures are extending beyond energy. The benchmark rate of the BOE would rise by 2 percentage points to 3.75% by May of the following year, according to investors.

According to Grant Fitzner, chief economist of the ONS, “food costs grew noticeably, particularly bread items, dairy, meat, and vegetables, which was also reflected in higher takeout pricing.” Inflation was driven up in July by price increases for other essentials including pet food, toilet paper, toothbrushes, and deodorants. 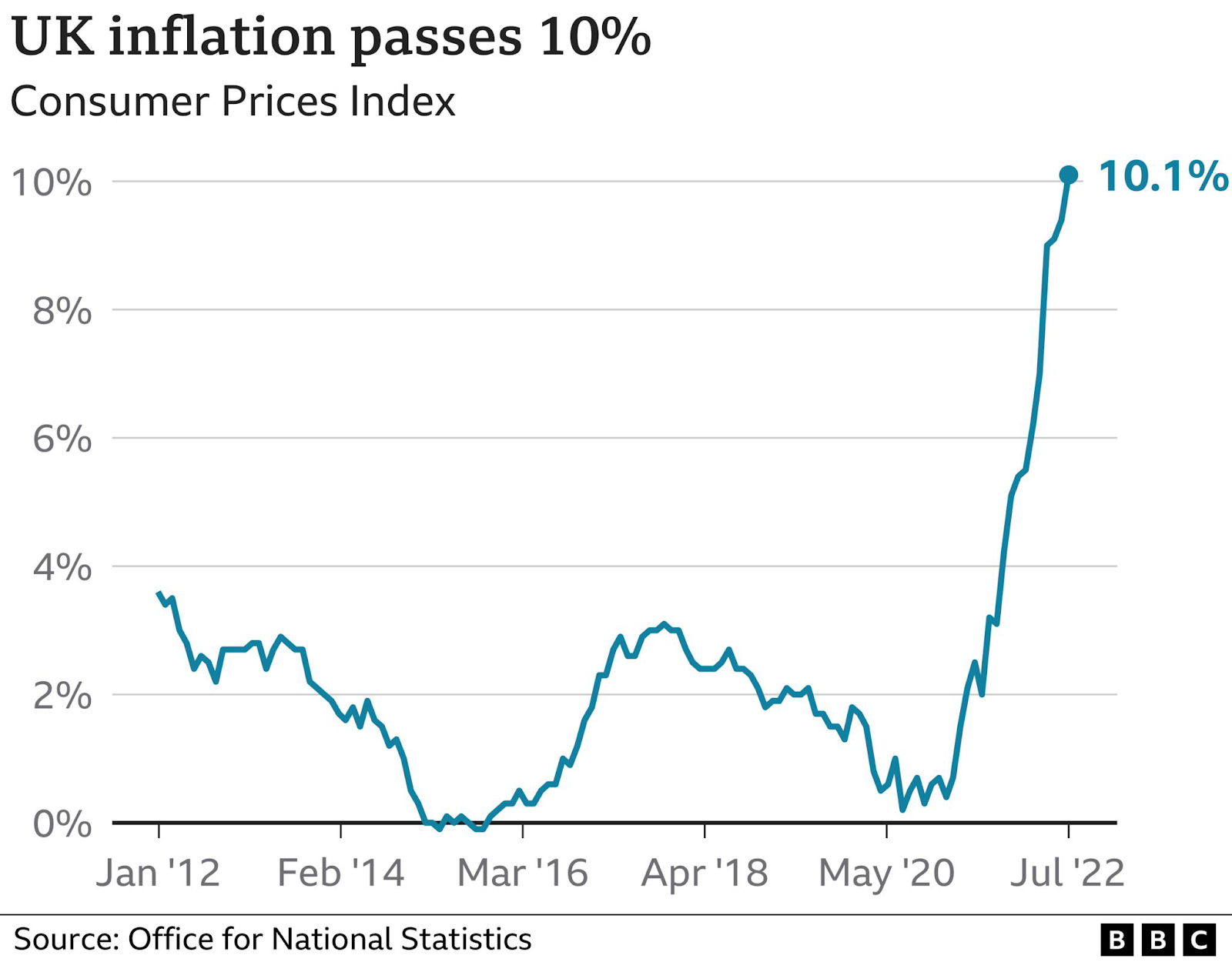 Why prices are rising so rapidly?

Andrew Bailey, governor of the Bank of England, stated that “the Russia shock is now the major driver to UK inflation.” However, economists concur that there are a number of them, including:

Increasing oil and gas prices have led to sharp energy costs. When the price cap is again reviewed in October, they are anticipated to rise significantly once more. Prices for gas and fuel have increased in part due to the cost of crude oil rising due to the conflict in Ukraine. Prices have dropped from record highs, but are anticipated to stay. Increasing food costs as grain production and expenses are squeezed by the conflict in Ukraine.

Prices don’t all operate in the same manner. Some other goods and services have remained the same in price or just marginally risen.

Many people’s pay increases aren’t keeping up with the inflation rate. The average pay increased by 4.7% in the year to June 2022, excluding bonuses. However, when you adjust for inflation, that pay’s real worth decreased by 3% from one year prior. When adjusted for inflation, total compensation, including incentives, decreased by 2.5%. While the government claims this might drive inflation even higher, unions contend that pay should reflect the cost of living.

Effect on other nations

The cost of living is rising in other nations as well. Increased energy prices, a lack of supplies of commodities and resources, and the effects of Covid are a few of the same causes. According to the ONS, UK inflation is comparable to the average for the EU. The most recent estimate of annual inflation in the eurozone was 8.6%. According to the US Labor Department, inflation in the US reached 9.1% in the year that ended in June, which is a 40-year high.

The Bank of England claims that the “current high rates of inflation are not expected to endure,” despite anticipating greater inflation in the autumn. Inflation is expected to peak this winter at 13.1% before dropping to 2% in around two years. But not all economists share this conviction. In the past, when inflation rose beyond 9%, the recovery process took years rather than months.

The Bank of England has historically increased interest rates in reaction to growing inflation. While this may promote saving, it also increases some homeowners’ monthly mortgage payments.

Raising interest rates increases borrowing costs and, it is anticipated, reduces consumer spending. They will buy less as a result, which will slow the rate of price inflation. But there is a limit to how effectively UK interest rate increases can curb inflation when it is brought on by factors like rising energy costs globally.

View all posts by InvestGrip